Fellowship Baptist Church was first formed on July 21, 1972, sponsored by Grace Baptist church out of Portland, Maine. In the early stages of the church’s formation, there was no building to call our own. Services were conducted in the Augusta Grange Hall for adults, children were taught in the basement, the nursery was operating out of a closet and the teens were taught in a school bus. Baptisms were conducted at the Augusta YMCA since the Grange Hall was without a baptistry.

Members of this newly established church would walk behind the Grange Hall and pray for God to give us the land to build our own church on. God answered our prayers and in 1976, the foundation was poured and the first church service was conducted on top of the concrete slab. It was the first themed message, Old Fashioned Sunday. The church construction was completed later that year.

Since then, our church building has seen new heating systems, interior renovations, landscaping and Pastors… But one thing will never change and that is the foundation of faith from which this church was first established.

The Bible is the Word of God

We believe the Bible to be the inspired and infallible Word of God.

The Bible is the only revelation of God given to mankind

We believe the Bible is the only revelation of God given to mankind.

We believe there is one God, eternally existent in three Persons: Father, Son and Holy Spirit.

The Deity of our Lord Jesus Christ

We believe in the Deity of our Lord Jesus Christ, in His virgin birth, in His sinless life, in His vicarious and atoning death through His shed blood, in His bodily resurrection, in His ascension to the right hand of the Father, and in His personal return in power and glory.

We believe mankind is saved by grace through faith

We believe mankind is saved by grace through faith in our Lord Jesus Christ alone and not by works, righteous living, monetary gifts, confirmation, baptism, church membership, or being raised in a Christian home.

We believe in the ministry of the Holy Spirit

We believe in the ministry of the Holy Spirit, by whose indwelling the Christian is enabled to live a godly life.

We believe there are two groups of Angels at work today

We believe there are two groups of Angels at work today. Holy Angels sent by God as ministering spirits to render service to those who will inherit salvation(Hebrews 1:13-14) . And fallen Angels controlled by Satan masquerading as “Angels of Light” to destroy mankind through false teachers(2 Corinthians 11:14-15).

We believe in the spiritual unity of believers

We believe in the spiritual unity of believers in our Lord Jesus Christ who hold to the doctrines and teachings of the Bible only.

How to get to Heaven

We believe in a firm understanding and agreement of the tenets of this creed will fail to get you to Heaven. That’s because you cannot mentally ascend into Heaven by reason, logic or by understanding the principles and beliefs of Christianity. The only way to get to Heaven is to be “born again” and have a personal relationship with Jesus Christ. 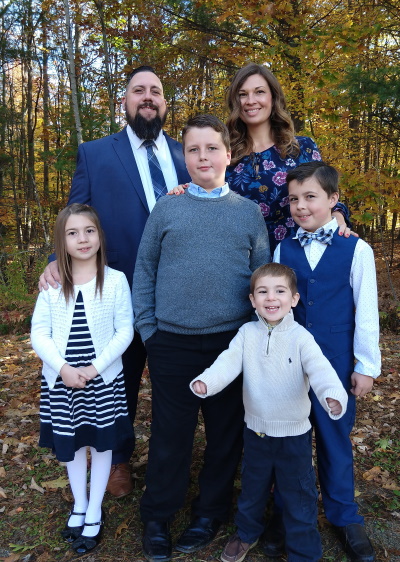 Pastor Rob Richards is a 1999 graduate of Calvary Bible Institute in New Philadelphia, Ohio. After moving from Ohio to Maine, in 2002, he worked as a full-time Paramedic/Firefighter until 2016. He joined the membership of Fellowship Baptist church in the spring of 2006 where he married his wife Jessica in 2007. They served together at FBC as joint Sunday School teachers. God has seen fit to bless their family with 4 beautiful children (Elijah, Ezra, Hannah, Ezekiel). In the spring of 2012, God called him to preach and he surrendered to the Lord’s calling on his life, and sought the direction of the Word and the leading of the Spirit. Later in 2012, he was hired as the Associate Pastor at Fellowship Baptist Church to serve with Pastor Don Williams who would retire in January 2016 due to his health. Pastor Richards was hired as the Senior Pastor on January 16th, 2016. He and his family have served FBC since and look forward to what God has in store for the future of our church family!